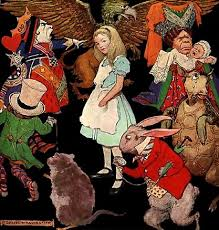 Be clear or else

Did gyre and gimble in the wabe:

All mimsy were the borogoves,

And the mome raths outgrade.

This is, probably, what a jury hears when you present a complicated case to them, full of precise legal jargon and elegant legal theories.

I am not a literature student, so Carroll’s poem makes no sense to me. On the other hand, it does make me extremely curious about what he means. My mind begins to try to figure it all out.

Two recent studies demonstrate this phenomenon. College students were asked to study 45 strings of letters from 6 to 9 characters in length each. Then they were divided into two groups:  One who read an absurd short story by Franz Kafka and one who read a rather straightforward short story. The groups were then asked to look at 60 strings of letters, among which were many of the ones they had studied before their reading. The “Kafka group” did better in finding strings—twice as accurate as the control group.

What am I suggesting? Do I think you should tell jurors gibberish so that they pay closer attention to the real details of the case?

Just the opposite, in fact:

Be clear. Be simple. Be organized. Be the anterior cingulate cortex for them.