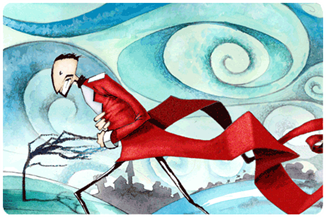 Persuasion is better than force

Aesop:  The North Wind and the Sun disputed as to which was the most powerful, and agreed that he should be declared the victor who could first strip a wayfaring man of his clothes. The North Wind first tried his power and blew with all his might, but the keener his blasts, the closer the Traveler wrapped his cloak around him, until at last, resigning all hope of victory, the Wind called upon the Sun to see what he could do. The Sun suddenly shone out with all his warmth. The Traveler no sooner felt his genial rays than he took off one garment after another, and at last, fairly overcome with heat, undressed and bathed in a stream that lay in his path.

Moral of the story:  Persuasion is better than Force

Lessons for the Attorney:

What if the story above was told like this:

Attorney:  Two parties disputed over who was most powerful. The critical element here is the definition of power itself. My client used 81MPH energy movement, creating some violent disruption of the proximate environment. The opposition used 81 degree temperature modulation which, by all appearances, created no environmental disruption whatsoever. Certainly the subject did remove his clothing, but that was from his the subject’s power, not from the power of the sun. The dispute was over which party was more powerful-wind or sun-not which could induce the subject to use his own power. Experts in this case will testify that the direct application of force from the movement of air is much more powerful than heat. They will show you how to equate force through a statistical manipulation . . .

Stories and images provide the vital case framework. The facts are just the bricks and mortar to fill in the frame.